Minister of Foreign Affairs Abdulla Shahid on Wednesday made an official call on the Secretary General of Commonwealth Patricia Scotland.

During the meeting, Minister Shahid officially presented the Secretary General with the documentation required by the Commonwealth and discussed on Maldives' wish to reintegrate with the organisation. 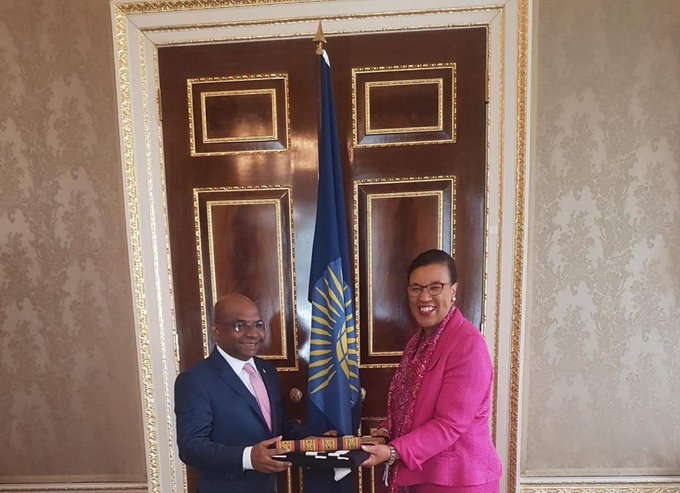 Submitted the documents requested by @PScotlandCSG for the Maldives to retake its rightful place as a member of the Commonwealth. Maldives looks forward to CHOGM 2020.

16 people are talking about this

Soon after President Ibrahim Mohamed Solih was elected into office, the Foreign Minister had submitted an official request to rejoin the Commonwealth as per the cabinet's decision.

Government earns MVR 1 billion in May

Ministry of Finance revealed on Thursday that the sovereign guarantee of USD 127.5...

Since hosting its first-ever consultation on August 27, 2014, Family Legal Clinic...

The Maldives exported a record amount of air cargo in a single day yesterday. Maldives...

Qatar Airways to operate a flight to rescue stranded tourists...

Qatar Airways is scheduled to operate a special flight to rescue stranded tourists...

Addu City Council on Tuesday announced the final list of individuals who are set...

The Emerald Maldives Resort & Spa is officially set to welcome its first guests...

Customs officials had briefed the newly appointed minister on their work, ongoing...