Heads of states and governments of Muslim majority countries gathered to discuss pressing issues confronting the global Muslim community, such as the prevalence of Islamophobia, regional peace in the Middle East and various issues and difficulties facing Muslims worldwide.

In President Solih’s statement at the OIC summit, referred to Maldives' unwavering support for the Palestinian cause as evidence of the country's consistent advocacy on behalf of Muslims everywhere.

According to the President, matters confronting the Islamic world are immense, "but by the collaborative efforts of fellow Muslim countries and the grace and will of Allah Almighty, we can successfully meet all challenges". 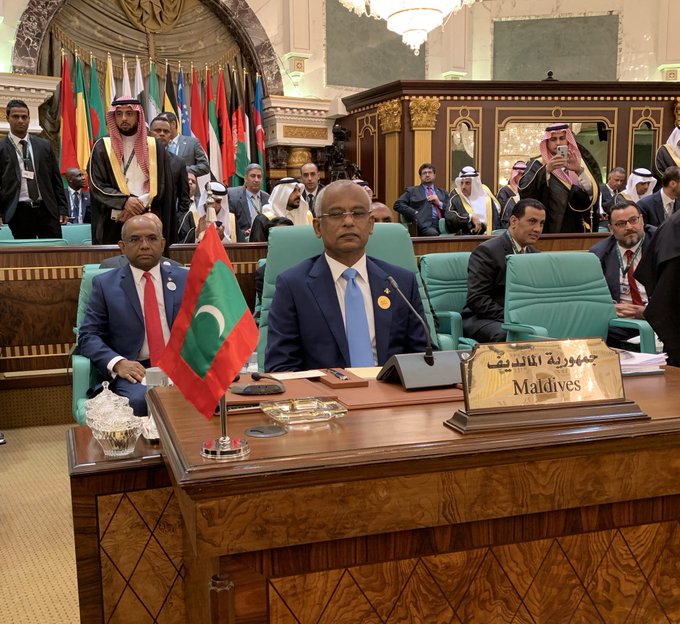 Honoured to accompany President @ibusolih at the #OICMakkahSummit on this holy night during the month of Ramadan. We can only tackle the challenges faced by the Islamic Ummah by working hand in hand with our brothers and sisters.

153 people are talking about this

Currently comprising of 57 member countries and representing over a billion people across the globe, OIC has aspired to speak as the collective voice of the Islamic Ummah since its inception in 1969.

Summits are held triennially in accordance with the OIC charter.

As the gathering is held in Saudi Arabia, it grants Maldivian delegation the opportunity to positively engage with Saudi Arabia on bilateral relations and development cooperation.

Whilst in Mecca, President Solih will also perform Umrah rites prior to returning to the Maldives.

Speaker of Parliament Mohamed Nasheed, on Wednesday, requested that the Committee...

Health Protection Agency (HPA) has announced that COVID-19 patient in the Maldives...

The Islamic Ministry has announced that the EId-Al-Adha prayers will not be held...

Chairman of Guest House Association (GAM), Moosa Nasih has resigned from the post....

The Presidential Commission Investigating Murders and Disappearances has denied...