High Representative of the E.U. for Foreign Affairs and Security policy and Vice President of the @EU_Commission @FedericaMog pays a courtesy call on President @ibusolih 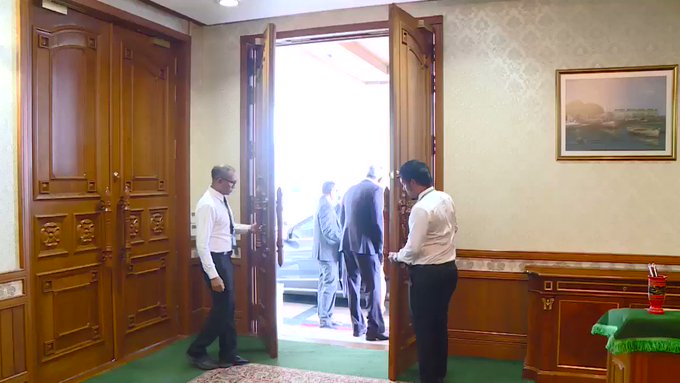 71 people are talking about this

During the meeting at the President's Office, the High Representative acknowledged recent democratic strides made by Maldives, adding that the two partners can now renormalize and renew a working relationship.

She congratulated the President on his electoral victory and his party, Maldivian Democratic Party, for its successful bid at the parliamentary elections, which she noted to be free and fair.

Both parties discussed fields in which Maldives and the EU can constructively engage in, highlighting areas such as security cooperation, tourism and environmental preservation among other important sectors.

In addition, both agreed on the need for institutional strengthening to aid the country to consolidate its democracy. In this regard, the EU is willing to lend assistance to combat corruption, strengthen the judiciary and undertake other similar measures to enhance good governance.

During the call, the President thanked the EU for the MVR 771.6 million loan recently provided by the European Investment Bank (EIB), in addition to EUR 5 million grant agreement for diesel reduction, signed during the side-lines of the Maldives Partnership Forum.

As the Vice President for the European Commission, she mentioned positive outcomes in potentially reducing tariffs for tuna-based products that Maldives exports to EU countries.

In order to enhance people to people contact between European countries, the president discussed the possibility of visa-free travel throughout the EU.

Her visit marks the highest-ranking EU member to have visited the Maldives to date.

Damages sustained due to weather conditions being monitored: NDMA

The Bank of Japan on Monday ramped up its emergency monetary easing and cut growth...

National Disaster Management Authority (NDMA) confirmed on Sunday, that they have...

High Court orders to detain Adeeb until appeal case is...

TB diagnoses machines to be sent to four atolls

Ministry of Health has stated that it will be giving out the GeneXpert machines...

Moosa Ali Kaleyfaan, member of the Human Rights Commission of the Maldives (HRCM),...

Housing Development Corporation (HDC) has revealed that discussions are ongoing...

Maldives Foreign Ministry has revealed that discussions will take place between...