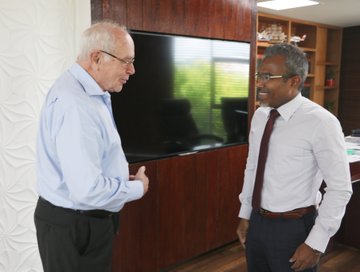 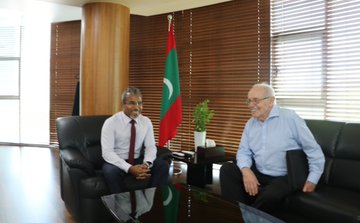 Attorney General @ibriffath welcomed Judge Johann Kriegler, Retired Justice of the Constitutional Court of South Africa to conduct an independent assessment of the Judiciary of Maldives.

34 people are talking about this

According to a circular released by the AG Office, Kriegler arrived in the country on Sunday, with assistance from the United Nations Development Programme (UNDP).

The former justice began assessing the judicial system since his arrival and will continue until the following Sunday, as part of the current administration's efforts for judicial reform.

Kriegler is scheduled to meet governmental administrative departments, judicial and other relevant state institutions, civic organizations and experts in the field.

His assessment includes analysing current laws and policies, drafting revisions to restructure the Judicature, evaluating the process of judicial appointments, and exploring possibilities to revise the procedure of taking disciplinary action in cases of misconduct.

A deadline for August 29, 2019, was allocated to present his findings and 'recommendations' to the AG Office.

He was called to the Johannesburg Bar in 1959, having obtained his LLB degree in 1958.

Additionally, he is a founding Chairman of Lawyers for Human Rights.

Between 1990 and 1993, he was an acting judge in the Appellate Division, then the apex court of South Africa. He was permanently appointed to its bench in 1993.

In 1994, he was appointed founding justice of the newly formed Constitutional Court of South Africa, and completed his term in 2002.

Scoot to suspend flights to Male

Singaporean budget airline Scoot announced it is suspending flights to Male’, in...

The government of India has granted financial support for several projects in outlying...

Consultations with oncologists facilitated at Fuvahmulah...

Arrangements have been made at Fuvahmulah Hospital to facilitate online consultations...