Minister of Foreign Affairs Abdulla Shahid on Wednesday met with top officials in the United Kingdom (UK) government on Wednesday, centred mainly on discussions regarding Maldives' wish to reintegrate with the Commonwealth.

During his short official visit to London, Minister Shahid first met with parliament member and former Minister of State for the Foreign and Commonwealth Affairs Hugo Swire. Reportedly, the conversations highlighted Maldives working in cooperation with the Commonwealth.

Am in London on a short official visit and will hold meetings with UK government officials and the Commonwealth. Started the day with meeting with my good friend @HugoSwire MP

45 people are talking about this

Tweet by the Foreign Minister regarding his official visit to the UK.

Following this meeting, the Foreign Minister sat down with UK's Secretary of State for Foreign and Commonwealth Affairs Jeremy Hunt. In addition to rejoining the Commonwealth, the ministers spoke about climate change issues as well as on the topic of strengthening bilateral ties between UK and Maldives. 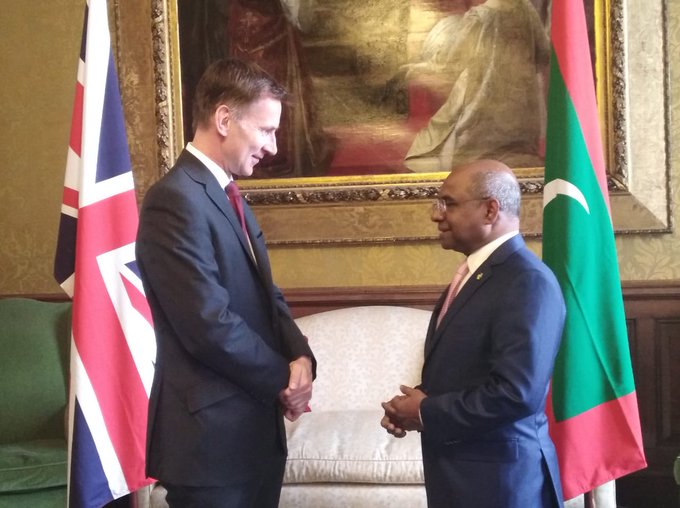 22 people are talking about this

Minister Shahid also paid a visit to British MP Mark Field, who serves as the Minister of State for Asia and the Pacific at the UK Foreign Office.

Minister Shahid is currently in London, on his second official visit to the UK since his cabinet appointment as Minister for Foreign Affairs.

Maldives Immigration has captured a man who attempted to enter Maldives using a...

Jumeirah Vittaveli wins big at the World Luxury Spa and...

Jumeirah Vittaveli has bagged five awards at the 2019 World Luxury Spa and Restaurant...

President Ibrahim Mohamed Solih on Friday, attended the 14th summit of the Organization...

Secret Paradise Shares How They Work from Home During COVID-19

In our current world of working from home, managing a team and keeping everyone...

Ministry of Economic Development has banned agencies from bringing in new Bangladeshi...

The appointment was made after the retirement and resignation of Khalid Ibrahim...

Minister of Finance Ibrahim Ameer on Wednesday, revealed estimates that the state...